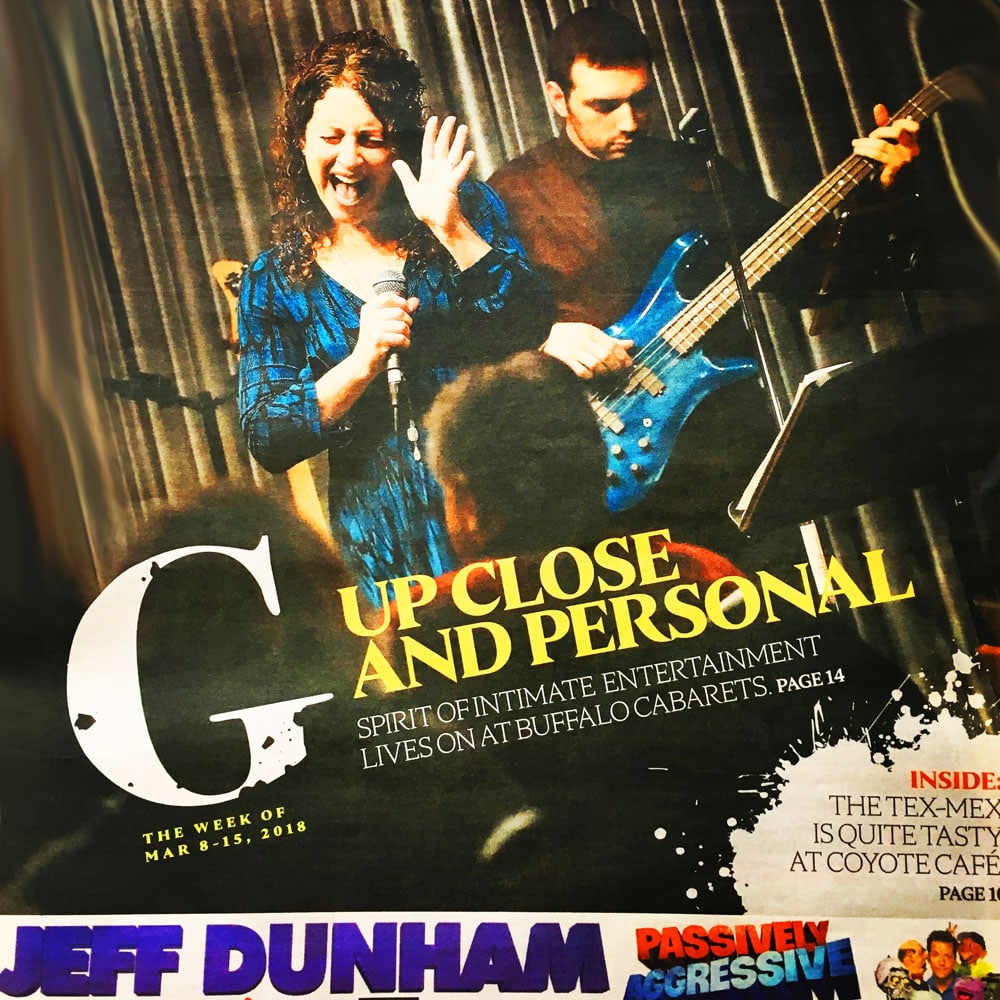 The cabaret of the musical “Cabaret” is history. But the cabaret spirit lives.

It lives in the kind of venue where the lights are low. A grown-up environment where drinks are served. Where you sit at tables — and, if it’s crowded, might be sharing your table with strangers. Hence the phrase cabaret seating.

And where the entertainment is the focus of the night.

At Desiderio’s Dinner Theatre, held at Bobby J’s Italian American Grille in Cheektowaga, the wait staff makes one more round before the curtain rises, to make sure patrons have everything they need. Then Jay Desiderio greets the house.

“I give a short talk before the show, and ask people, ‘Please silence your phones.’ I don’t want anyone doing a Patti LuPone on the audience,” he laughed. “Once the show starts, the lights go up on stage, and it transforms the room.”

Randy Kramer and Theresa Quinn, proprietors of MusicalFare Theatre, wanted that kind of connection when they transformed their lobby in 2014 into a cabaret space, with tables, a bar and a bandstand.

Six shows a year take place in the adjoining theater space. But in the month or so between production, cabaret shows fill in. It might be a piano man playing a tribute to Elton John. It could be a big band or a jazz combo, ideally with a singer or two. It could be a combination of comedy and song.

Kramer and Quinn like to team up on two-piano evenings.

“I hear people talk, hear them talk about what they like and don’t. People are close enough so you can feel them,” Quinn said. “With theater, you can never break that fourth wall and not have it become chaos,” she said. “Sometimes you can’t even do that in a bar gig, because you are dealing with the din of the room. But you can do that in cabaret.”

DeeAnn DiMeo Tompkins has made a name for herself singing Top 40 with the legendary party band Joyryde. But she has branched out into jazz and other quieter genres, singing in a cabaret setting.

Recently she performed at the intimate jazz venue Pausa Art House, singing songs sung by Billie Holiday, as well as originals in the same spirit. The house is tiny, and DiMeo Tompkins thrives on the closeness with her audience.

“Joyryde is fun. It’s pop music, and we make people happy, and I love watching them smile. Having them come up and say how much fun they had, that’s beautiful,” she said. “But to pour out your soul in Billie Holiday songs, in Pausa, an intimate space, that is something I love.”

The Holiday songs she sang included “Lover Man, Where Can You Be?” and “Fine and Mellow,” a lovelorn blues song written by Holiday. “Her lyrics are so painful,” DiMeo Tompkins reflected.

Songs like that, she added, resonate in a small setting.

“The connection is so intimate. You’re definitely touching people. They’re touching you. They help me, I help them. The other night a woman came up to me. I did not know her. She was alone. I could feel something was going on. She came up to me at the end of the night, and she said, ‘You have no idea, I had the worst day ever. You helped me get through this day, and I am so grateful to you.’

She spoke from the heart.

“I get those stories all the time,” she said. “Music is such a universal language. It’s such a healing. That’s the reason I keep singing. You connect with other people. While I’m on the planet, this is what I need to do — Joyryde, blues, and jazz.”

DiMeo Tompkins’ recent CD embraces a variety of genres and so do her small shows. She might include a rock song she has reworked into an intimate setting. “We have an old Michael Jackson song, ‘I Want You Back.’ We do ‘Some Kind of Wonderful,’ ” she said.

The positive trend of the year